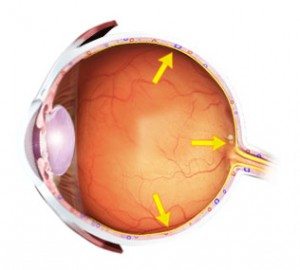 Glaucoma is an eye disease that results in progressive vision loss due to the increased intraocular pressure and subsequent optic nerve damage. Optic nerve is a bundle of nerve fibres that carries visual images or signals from the eyes to the brain. In general, a clear fluid called aqueous humour circulates through the eye and then drains out through a mesh-like channel (trabecular meshwork). Whereas, in glaucoma this channel becomes blocked and fluid does not drain properly thus increasing pressure inside the eye (intraocular pressure). This increased intraocular pressure causes damage to the ocular nerves and blood vessels resulting in loss of vision.

The different types of glaucoma include:

The aim of the treatment is to reduce the pressure in your eyes, which involves using special eye drops or medications. In certain cases, laser treatment or surgery is performed to prevent further damage.

Glaucoma surgery involves either laser treatment or conventional surgery in which a cut is made in the eye to reduce intraocular pressure (IOP) for preventing further vision loss or blindness.

Laser treatment is usually recommended if the use of eye drops does not improve your symptoms. Laser treatment involves using powerful beams of light to improve the flow of fluid out of your eye and reduce the pressure inside the eye.

During the laser surgery, your eye is numbed with anaesthetic eye drops. Then, your doctor will place a special lens in front of your eye. Afterwards, a laser beam is aimed into your eye and you can see flashes of coloured light.

Types of laser surgery for glaucoma include:

Laser trabeculoplasty: Laser trabeculoplasty is often used to treat open-angle glaucoma. The laser is aimed at trabecular meshwork, where fluid drains from the eye. This surgery opens the clogged areas and makes it easier for fluid to flow out of the eye.

There are two types of laser trabeculoplasty surgery:

Laser Iridotomy: Laser iridotomy is normally performed to treat people with closed angle glaucoma. During iridiotomy, the laser creates a small hole through the iris to improve the flow of fluid from the back of the eye to the trabecular meshwork. This opening drains out the fluid and helps lower eye pressure.

Cyclophotocoagulation or laser cyclo-ablation: Laser cyclo-ablation may be helpful in treating people with severe glaucoma, which has not been manageable with medications or surgeries. In cyclophotocoagulation a laser is used to destroy the parts of the ciliary body, a part of the eye that produces eye fluid. This therapy decreases the production of fluid thus reducing the eye pressure.

A trabeculectomy is the most common type of surgical procedure performed to relieve pressure caused by glaucoma. During the procedure, a new drainage channel is created to ease drainage of fluid from the eye. This new opening allows fluid to drain out of the eye forming a bleb covered by the white outer covering (the conjunctiva) of the eye. Over time the drainage site can scar and therefore close up. Scarring is the main reason for failure of trabeculectomy. Anitmetabolites can be used to reduce the risk of scarring. Mitomycin C (MMC) is most commonly used antimetabolite in trabeculectomy surgery. Mitomycin C inhibits the multiplication of cells which produce scar tissue, thus preventing the scar formation.

Trabeculectomy with antimetabolites is generally recommended for reducing intraocular pressure in patients with advanced glaucoma.

You may have a slight burning sensation in the eye during laser surgery. Your eyes may feel irritated and have slightly blurred vision. Rarely a short term increase or an excessive drop of intraocular pressure can also occur after laser surgery. Both of these complications can be manageable with medications. You may also have a slight risk of cataract formation after some type of laser surgeries for glaucoma.