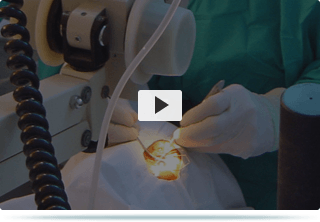 Laser photocoagulation is the mainstay treatment for diabetic macular oedema. It is the process of sealing leaking blood vessels, by focusing an intense beam of light (laser), to stop the excess accumulation of fluid in the macula. DME is characterized by microaneurysms, small protuberances in the blood vessels of the retina. During green laser therapy, a laser beam is targeted on the microaneurysms. Laser photocoagulation technology using the green wavelength of light is used as it is readily absorbed by haemoglobin (iron-containing pigment in blood cells). Haemoglobin present in the microaneurysms absorbs the laser light and promotes the clotting of the leaking blood vessels, preventing further leakage from the microaneurysms. Green laser therapy also improves the supply of oxygen inside the retina and reduces the formation of new abnormal blood vessels.

LUCENTIS® injection is a prescription medicine injected into the eye for the treatment of diabetic macular oedema. A patient with diabetic macular oedema can have increased amounts of a protein called VEGF-A, which can lead to leakage of small blood vessels in the affected eye. LUCENTIS blocks this protein and has been found to significantly improve the vision of the affected eye.

OZURDEX® implant is a small rod-shaped implant containing the prescription medicine dexamethasone, a corticosteroid, which is injected into the eye (vitreous) in your doctor's office to treat DME. The vitreous gel present in the eye slowly dissolves the biodegradable implant releasing the medication. OZURDEX blocks the leakage of the blood vessels present in the retina and reduces swelling or inflammation in your affected eye.